Taking a different direction here and trying out a more HowTo style post. I thought I’d do a quick write-up covering WiFi SSIDs on multiple VLANs, something that might be useful in a home setup, separating SSIDs better from one another. While I usually prefer the CLI, a lot of the devices mentioned here only (or mainly) use a web GUI for configuration management, so this posting will include a lot more screenshots than my usual postings. This posting won’t contain anything exciting for people who run and support networks professionally (mostly just a “so what options are available on SOHO hardware?”), and may even be overly simple and assume settings you wouldn’t do in a professional setup. But it is useful for homelab enthusiasts looking to build a more complex setup than “everything on the same VLAN/network” or trying to figure out “how do I use VLANs, give me an example”.

Ubiquiti and Netgear have some reasonable priced network gear that I’ve written about in the past that behave decent in home networks. For out little setup today we will have a WiFi access point with multiple SSIDs, two switches, and a firewall/router. We will be focusing on the configuration of the WiFi Access Point (UniFi AP) , the two Netgear switches (GS105Ev2 / GS108Ev3) and the Ubiquiti Router (Edgerouter X).

Our goal is to have two SSIDs on the access point, one for the “normal” devices (VLAN 1), and one for separate devices (VLAN 178). Since the router to VLAN 178 is on a different switch than the access point we also need to trunk both VLANs across the network. Another way of looking at it, is that we are expanding Subnet/VLAN 178 into our network (but limiting it to the WiFi Access points). 178 doesn’t hold any special meaning, you can use any VLAN number you want, just chose 178 because the subnet in this test setup was 10.0.178.0/24.

Here is a diagram of our test setup: 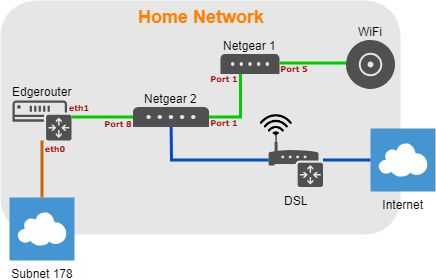 In the UniFi controller go to Settings->Wireless Networks either create a new network or edit an existing one. If you go into the advanced options area, you will find the VLAN setting for that SSID. Activating the option and setting a value means the access point will tag all packets from that SSID to the specified VLAN number.

The Netgear devices only have a VLAN 1 defined by default, so the first step will be to add VLAN 178 to both of them. Enable Advanced 802.1q (VLAN->802.1Q->Advanced->VLAN Configuration), enter the VLAN ID 178 in the box and click on “Add” at the top.

Now let’s move on to the VLAN Membership configuration. To switch settings, just click on the port and it will switch from tagged->untagged->none.

For VLAN 1 we want port 1 to be (T)agged since it is the trunk to the next switch, and all other ports (U)ntagged since they will be dealing with untagged VLAN 1 traffic. The PVID will also be set to 1 for all ports.

VLAN overview after changing all the settings:

For this scenario it is sane to leave the Port PVID configuration to PVID 1 on all ports. You could change a port to 178 if you are expecting untagged traffic on that port that needs to be in VLAN 178.

Similar configuration as the first switch so I’ll skip the screenshots. Port 1 is the connection to the Netgear 1 device, port 8 is connected to the Edgerouter.

Make sure the interface switch0 spans all ports you want to use VLANs on. Add the two VLANs 1 and 178. They should show up in the list as switch0.1 and switch0.178, and you can apply firewall rules to these interfaces to restrict traffic if you are doing any routing between the two networks.
We will want to tag everything from Subnet 178 as VLAN 178 on the interface connected to that network (eth0 in our setup), and allow VLAN 178 on the outgoing interface (eth1 in our setup). The Edgerouter doesn’t need us to specifically allow VLANs already set by the PVID, only additional VLANs need to be specified in the vid field. 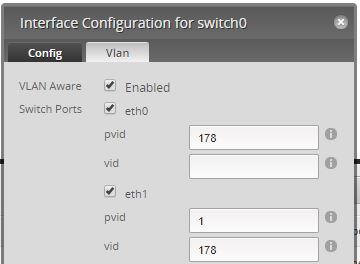 Where to go from here?

You could put servers or virtual machines in their own subnet/VLAN and then use a firewall to restrict access between the different networks.

I’m currently playing around with my two WL-330GE Access points from asus (see an older posting). Since that posting I was a bit creative using the existing ethernet cabling and ports in the apartment to be able to retire the WiFi bridge without having any cable going through the apartment.

So I decided to use the two access points for something more useful. I’m playing around with dd-wrt to build configurations to use them as WiFi probes (for an IDS), or as Rouge Access Points (for demonstration purposes and to test wireless IDS solutions).  I might compile my own dd-wrt version for the rouge version, there are a few things I miss to build a truly evil device.

I like the size of the devices (very compact) and that you can power them with 5V (you can run them off any USB port, right now the one here is hooked up to the USB port of a printer intended for cameras) the only thing missing to make them perfect would be Power-over-Ethernet and maybe a GSM interface to upload data online.

Fun having a cheap and small device like this with Wifi and ethernet running linux. Provides lots of possibilities and fun.

I recently bought the WL-330gE_M from Asus. It is a pair of access points pre-configured to bridge 2 LAN networks via wireless, all you have to do is take them out of the box and plug them in, straightforward and simple, no configuration needed. They are intended to enable hooking up devices to the internet that don’t have wireless and without pulling cables through the house (e.g. dvd player, TV, cable box, …).

The package arrived last week and it was a matter of minutes plugging the devices in and having everything working.  Everything worked without any setup, took me longer to get them out of the box than to hook them up. Unfortunately our network storage (NAS) is also on the other end of this wireless bridge, and I noticed that when I move large files around (>2GB) or while streaming video/audio off the NAS the connection was dropping out. I don’t mean “ups and downs in the speeed” that is to be expected over wireless, I mean “connections resetting, copy actions aborting with error messages”. Not fun. Unfortunately since the devices are geared toward the “no configuration necessary, just unpack and hook up” crowd, there is no webinterface to see a syslog of what is happening or changing settings. Nada.

After this happening a few times it got really frustrating. I can live with slow, but connections dropping is out of the question. My original plan was to just reset the devices, flash them with a WL-330gE firmware and reconfigure the bridging (the only difference I could find was that the WL-330gE_M is black and not white, and comes preconfigured, and probably has a slightly different firmware without management capabilities).  While I was looking at different options and possibilities I went over to dd-wrt and happily saw that the WL-330gE was supported in the router database. So I decided if I was going to mess around with firmware, I could just as well throw dd-wrt on it.

Even though I am a system administrator, I don’t have the urge to have every device in the house running on Linux with a shell I can ssh in to. I’m perfectly fine with a simple interface that does what I want it to. But the wireless settings I can fine tune in dd-wrt are priceless (especially since I wanted to debug and fix the connection dropouts), normally you only get these options with cisco grade hardware.

The firmware upgrade process of the devices is simple and straightforward. Pull and reapply power with the reset button pressed until the power LED starts flashing, then shove the new firmware onto the device via tftp. Either with the “Firmware Restoration” tool from asus, or with a normal tftp client. I used later. Since this is so straightforward I guess I could also switch over to the official firmware if I wanted to, making two WL-330gE out of the WL-330gE_M pair (saves money since the pair is cheaper that buying two separately).

When in recovery mode (waiting for someone to tftp a new firmware onto it), the device has the IP 192.168.1.220 by default. This is just a rough summary of the steps, anyone wanting to do this should really read through the whole process of deploying dd-wrt with asus, there is important information there (even if the example is a WL500, the WL330 is similar). Just because it worked for my hardware,firmware,setup doesn’t mean you have the same hardware or are deploying the same version I did. Read the dd-wrt documentation before you brick your device.

Clear current settings from the nvram:

Wait 5 mins, reboot and open http://192.168.1.1 To be on the safe side feel free to navigate to Administration -> Factory Defaults to make sure no junk was left behind.  To get bridging configured there are multiple possibilites depending on your needs. For plain LAN bridging you will probably want WDS or one device setup as a AP and the second as a Client Bridge (I used the latter option). One thing you will want to do is go to Setup -> Networking and set the WAN port to “disabled” since the device only has LAN and Wireless.

The rest is fairly ease, set up one device as an AP, chose WPA2 with a good long strong PSK. After testing if the AP works with e.g. a laptop, you can set up the 2nd device as a Client Bridge, just make sure you are on the same channel, same SSID, same security settings.  After everything is up and running now would be a good time to pull backups from the configuration. Might as well tweak around in the wireless advanced settings. If you mess up anything badly enough that it won’t connect again … well that is why you made the configuration backups 😉

As you probably guessed by now, the connection drops are gone, connection is smooth and stable. Peak speed is not quite as fast as before because I throttled some things and tweaked settings for stability, but still good. Turning the TX antenna output power from 71 down to 65 helped a lot and got the maximum out of the connection (probably less crap pulling my SNR down). And now I can see what the access point is doing and where problems are when they arise 😉